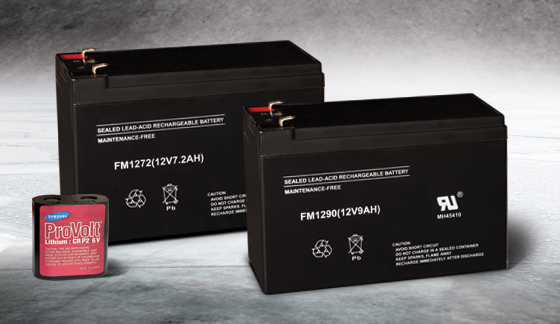 Most anglers will wake up some frigid day this December, look out upon a frozen expanse of water and decide, “Today is the day I go ice-fishing.” But you’re not like most anglers. You’re a Marcum angler. Ice-fishing isn’t just something you do; it’s something you do better than everyone else you know. You do your homework, prep your gear, and make plans for the first-ice bites you KNOW will be happening, just like they have for seasons and seasons before. Which is why you’ve probably already dug your flasher out of storage, kept your batteries maintained over summer non-use periods, and have already ensured your ice-electronics will be working properly the second you deploy them.

This article is for everyone else. Maybe you’re new to the party, or maybe your open-water fishing went longer than anticipated. It matters not. What really matters is that you get a handle on your battery situation before it costs you fish. “I hear it all the time,” says Marcum Technologies key consumer services lead and guide Chris Hansen. “We get a flood of calls right at first ice, and almost all of them are battery-related.” So if most ice-electronics issues are caused by battery problems, how do we avoid them to begin with?

Here’s what we know. Your Marcum runs on a 12volt battery, ranging in amperage from 7 -9 amps typically, with more amps equaling longer run-time between charges. Marcum does not make batteries, rather it partners with battery manufacturers annually before ice season to ensure you get the freshest ones possible. Ice Force Pro Joel Nelson makes sure his batteries are fresh by employing a “born-on-dating” strategy to his ice-prep. “A few years ago, I just started putting a piece of duct tape on the battery, and wrote the year of purchase on there with a Sharpie.” Sounds simple doesn’t it? Nelson continues, “I’ve found that the older the battery, the more likely I am to have problems with it, so I can best manage my fleet by knowing what battery is going where.”

Age isn’t the only determinant to how well a battery will run however. “No matter how old it is, the key to proper Marcum performance starts 6 months prior, when you last put away your electronics and the battery within,” says Hansen. “Storing an uncharged battery over the summer leads to a discharged, dead battery come first ice. You can never make a mistake by charging your batteries after each use, so that’s what I recommend people get in the habit of doing.” Hansen also explains, “Batteries have a lifespan. Some batteries when properly maintained can last for years and years, but don’t expect them to. With all the rough treatment these batteries can see during transport and use, replace your batteries after 4 – 5 years. “

The good news? You’ll never have to be concerned that your Marcum will let you down during that last hour-long flurry of fish activity if you have an extra battery. That’s right. We said it. Get an extra battery. “It gives me an excuse to get a new one,” says Nelson, who rotates his oldest battery in the group to be the “backup.” Nelson continues, “If you’re really fed up with battery issues, just go Lithium.”

Lithium Ion technology has proven a worthy alternative, and has solved many of the primary problems of traditional batteries in that they not only achieve longer run-time, but they offer an incredible weight savings. At half the mass of your average ice-battery, the Ice Force Lithium Ion battery offers hefty-savings by the pound, not the ounce. Perhaps more importantly, this battery lasts up to 5-times longer than your average lead acid ice battery, and only takes 3 hours to fully charge. With extended run-time, longer-life, quicker charging, and the lightest weight in-class, the Ice Force Lithium Ion battery offers extreme benefits to the hardcore ice-head and weekend angler alike.

For more information on all of the battery offerings by Marcum, go to www.rapala.com/marcum/parts-accessories.