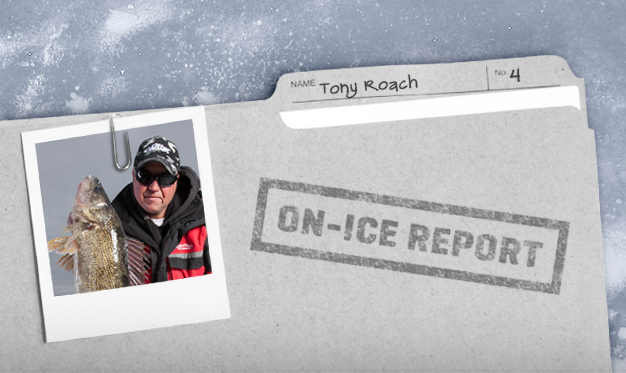 Although recent sub-zero temperatures have required a roof over his head, Tony Roach remains on the move in his quest to put clients on big Mille Lacs Lake walleyes.

“When you can’t get out and ice troll, you’ve got to keep the guys on the move in the portables, where they’re warm, comfortable, and of course, where they’re going to catch a lot of fish,” says Roach, an ICE FORCE pro-staffer, preeminent Mille Lacs Lake guide and popular ice-fishing media personality.

Although Roach prefers “ice trolling,” January’s sub-zero spells did not allow for much of it, as the process involves drilling and fishing through multiple holes, monitoring them regularly by walking a circuit of them and dropping a MarCum transducer to check for fish.

But when the Mercury plummets, Roach scouts locations and checks holes in his truck, as his clients fish comfortably in fully thermal Otter Outdoors portable ice houses set up on fish-holding points, breaklines, contour shifts and inside turns.

“I’ll bounce around and either truck-door fish or use the truck as a little bit of a wind block and I’ll check various points really quickly,” Roach explains. “I might only fish five minutes on that point, just seeing if I can raise a fish… If I get into an area where I see fish, even if they’re not biting, or they’re not coming in fast and furious, I’m always returning to those spots … because I know that as soon as the sun gets lower on the horizon, or you get some cloud cover rolling in – boom! – those fish turn on.”

Once he sets up clients on a good spot, Roach will encourage them to try various approaches before moving – especially in the changing conditions that were the norm throughout January and appear to remain in store through early February.

Despite his penchant for ice trolling, Roach does spend a little more time on each hole while fishing in sub-zero conditions.

“When its not fast and furious and you have to set up in a shelter, as long as you’re seeing fish cruising, hang there for a while, even if they’re coming through there every 15, 20 minutes,” he says. He and his clients are catching “lots of big fish,” with this strategy.

As the bite slows however, Roach will move his Otters to the next spot he scouted in his truck. Designed for fishing on the move, the portable Otters are easy to fold down, tow to the next spot and then set up again.

“That’s been our biggest key to success all winter – just staying on the move,” Roach says. “You hit one spot, pick up two or three fish, go to the next spot, two or three fish, maybe zero, then all of a sudden, you hit that jackpot.”

Generally, the bite has been more consistent with warmer temperatures, Roach says.

Colors for conditions
In sub-zero temps and changing conditions, Roach says anglers should experiment with downsizing baits and multiple colors.

“There’s times when we’re catching them on glow colors and then all of a sudden, that sun will peek out, or a front will quit and then boom, we’re right back into silver, gold, more natural presentations,” he says.

Red and fire-tiger-style spoons “have been phenomenal” on partly cloudy and mostly cloudy days, Roach says. “As the sun comes out, or as the sun goes away, we’ve been mixing it up between gold and silver, [red] and orange … Those have been great colors.” He suggests rigging one rod with a gold or silver spoon and another tied up with a more eye-catching color.

Go deep
The deep-freeze bite has been the toughest – and least consistent – during mid-day hours, especially on high-sun, blue-bird sky days. In those situations, Roach has been fishing deeper.

“A common theme this year has been fishing in deep water, especially in daytime hours, when the sun is high in the sky,” he says. “I’ll fish three, four, five feet off the bottom and a lot of times those fish come in just below, or right at your bait and they race up and smack it. If they’re going to come up that high in the water column to hit something, they’re going to take it.”

When fishing deep, Roach presents his bait about three to four feet off the bottom, and he’s not afraid to raise it up.

“Work ‘em high,” he says. “If you’re fishing really close to the bottom, you’ll notice they’ll come up real slow, but as soon as you raise that bait, they’re going to come up and strike it.”

That said, Roach has noticed remarkable differences in the attitudes of fish he’s caught this season.

“Some just come flying in and nail it, other ones come in just really slow,” he says. “You just have to play every fish and act like every fish is a biter. Sometimes I’ll jig it up high in the water column, especially [when] we’re fishing out in deep water.”

Play dead
Throughout all of his hole hopping and spoon fishing, Roach always keeps some deadstick lines in the water.

“The deadsticks will bail you out on the days when they’re not cruising,” he says. “They’ve been producing fish time and time again for us.”

He deadsticks shiners or rainbows on #4 or #6 hooks two to three feet off the bottom, on both tip-ups and bobber lines.

“They’re coming in and hitting that minnow just tipped with a plain hook.”