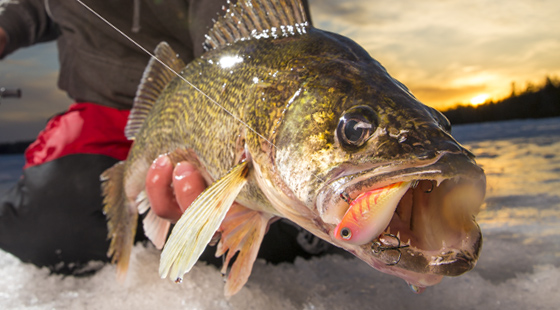 When the bite window opens, it pays to be in the right place, with the right baits. For Prairie Pothole walleyes this month, that means fishing Rapala® Ultra Light Rippin’ Rap®s and VMC® Tingler Spoons in ten to 15 feet water at dawn or dusk.

“Our bite windows have the tendency to be really short, so you want to make sure you’re all set when they turn on,” says ICE FORCE® Pro Andy Fiolka, an expert at coaxing ‘eyes, perch and panfish to bite in the glacial lakes in and around Aberdeen, SD.

For Fiolka, preparing for walleye prime time includes rigging not one, but two, rods with Ultra Light Rippin’ Raps.

“That’s my number-one go-to bait for walleyes,” he says. “I have one tied on two different rods all the time. One in Glow Yellow Perch and another in either Pink Tiger UV or Green Tiger UV. I have so much confidence with those.”

A smaller version (size 4) of a Rapala Rippin’ Rap® (sizes 5-7), the Ultra Light Rippin’ Rap flutters on the drop with a hard-vibrating action accented by a loud, distinctive BB rattle system. Drop it above a bottom-transition area, give it a few aggressive rips, then shake it gently in place.

Fiolka fishes Ultra Light Rippin’ Raps on clear, 6-pound-test Sufix® Ice Magic monofilament. Rather than tying directly, he uses a small VMC crankbait snap. This allows him to switch out color patterns more quickly while he’s dialing in a bite.

Although best known as can’t-miss walleye baits, Ultra Light Rippin’ Raps nab bruiser perch as well. “A lot of times, you’ll find bonus perch in your prime walleye area,” Fiolka explains. “And the big ones, they’re not shy of the Ultra Lights. I’ll often catch both species on them in the same spot on the same night.”

When the walleyes get timid, however, Fiolka turns to his Tingler Spoons. “I’ll start with an 1/8th oz. size, but downsize, if needed,” he says.

While most spoons cover only the small-diameter water column directly under the hole you’re fishing, Tingler Spoons flutter – slowly and seductively – far out to the sides. Tip a Tingler Spoon’s treble hook with a minnow head, let it flutter to the bottom, then work it back towards your hole with short hops.

Fiolka’s most productive Tingler Spoon color patterns this month have been Yellow Perch and Emerald Shiner. When water clarity is a little more stained, Glow Chartreuse Shiner is good.

Whether he’s jigging Rippin’ Raps or fluttering Tingler Spoons, Fiolka finds walleyes most often around “shallower structure toward the peak walleye times of early morning and late afternoon into evening.” As it is in most places, that peak bite window is generally from about an hour before dawn or dusk until about an hour after. This month, the majority of Fiolka’s walleyes have come out of 15 feet or less, “and sometimes as shallow as five foot,” he says.

He targets “bottom transitions” – those areas in which the lake bottom changes sand to rock, from mud to gravel, or goes from shallow to deep quickly. The bottom in one recent hot spot, he recalls, went from 20 feet to 8 feet in about 10 yards.

“A lot of our lakes are mudholes, so any good depth change is good,” he explains. “Those walleyes can sit all day down deeper there and then at night come up and push perch up shallow. If you can find a really steep break that flattens out on the top and bottom, the walleyes, a lot of times, will set up on that break.”

Many of the transition areas Fiolka has been fishing this winter he way-pointed in the fall with the sonar/GPS unit on his boat. In the winter, he mounts those electronics on his ATV and drives right to his waypoints, where he drills holes. He then uses his MarCum flasher to determine which holes are holding fish. MarCum underwater cameras can be a big help too.

“Look ahead of time for those high-percentage spots and get your holes drilled before that bite window really opens up,” Fiolka instructs. “Make you’re on the right stuff, or you could waste a day.”

Most years, ice fishing in the Aberdeen area “is pretty fantastic,” Fiolka says. And if on any given day, you’re not getting bit, you often can change your luck by changing lakes.

“We have so many good lakes in such a small area that if they’re not going on one lake, they’re going on another one,” he says. “There’s always a solid bite out here, you just might have to bounce lakes to get on it.”

You can try Fiolka’s walleye strategies not just in around Aberdeen, but throughout the Prairie Potholes Region, which covers an area of about 275,000 square miles and includes parts Minnesota, Iowa, North and South Dakota and Montana. And while every lake in the region is indeed different, “they often have similar characteristics,” Fiolka explains. “So if something works on one lake, there’s a good chance that if you find that similar structure or bottom composition on another lake, it’s going to have the same result.”