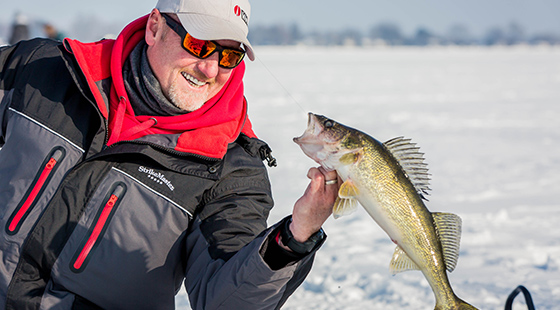 One of Kurt Walbeck’s most unexpected walleye landings last winter relied on a bait he was not surprised in the least would get bites – a Rippin’ Rap®.

After tempting a hefty ‘eye to slam the Rippin’ Rap, the Outdoor Bound TV host inadvertently knocked the bait from the fish’s mouth with his transducer, but dove quickly and jammed an arm shoulder-deep down the hole and pulled a girthy, golden Wekusko Lake Walter above-ice with an iron grip. It made for a memorable TV moment.

“He got off right at the hole, but I happened to see his head down in the hole, and the ice is so deep right now, he couldn’t get back down the hole, and I was able to go down and grab him!” Walbeck exclaims. “He came up and he nailed, absolutely nailed, that Rippin’ Rap!”

When he’s seeking big walleyes under the ice, Walbeck uses several key baits, which he fishes aggressively to attract active fish from a distance, calling them into the sonar cone below his hole. Rapala® Rippin’ Raps and Jigging Raps are among Walbeck’s most effective below-the-ice search baits. Not coincidentally, they’re among his favorite open-water lures as well.

Featuring flat, skinny sides and a deep-belly profile designed to dive and rip, Rippin’ Raps flutter on the drop with a hard-vibrating action accented by a loud, distinctive BB rattle system.

“If I can get something that glows or rattles, that’s my go-to bait,” he explains further. “Especially when you get to these low-light hours with these low-light-feeding fish like walleyes, I’m telling ‘ya, they’ll react every time.”

Jigging Raps swim in tantalizing circles on the fall to attract walleyes from a distance. A Jigging Rap® in the Chrome Blue color pattern is one of Walbeck’s top-two all-time favorite go-to baits.

Walbeck’s affinity for Jigging Raps is shared by the Outdoor Bound TV pro-staffers and guests who fish with him on-camera – as was evidenced when his crew used them last winter to ice multiple Wekusko Lake walleyes which Walbeck wrestled the big Waldo up onto the ice by hand. You can catch all the amazing highlights on the Outdoor Bound TV website.

You’ll get no argument from Outdoor Bound TV Pro-Staffer Capt. Lee Haash. A Jigging Rap, he says, is “probably one of the most go-to ice fishing baits, and even open-water baits,” of all time. “It has a complete swimming action and probably … best imitates a minnow of all the baits out there.” With single reversed hooks on the nose and posterior, and a center treble hook hung from a belly eyelet, Jigging Raps don’t allow for misses — regardless of how a fish attacks, it’s running smack dab into a hook. Weighted and balanced to perfection, they simulate the erratic characteristics of a wounded baitfish better than any other lure under the ice.

“As its going up and down it’s almost like a distressed minnow trying to get away from them and they just can’t resist it,” Haash explains. “Once they start following it up, they tend to commit.”

He likes to dress a Jigging Rap’s center treble hook with some minnow meat.

“With that little bit of minnow head or tail hanging on that bottom hook, it gets them to zero in on that hook,” Haash explains.

“It just helps, if you get ‘em to chase up, centralize on that middle hook,” he says. “And it makes sure that they’re going to get one of those [hooks] in there.”

Jigging Raps are available in five sizes and 26 colors. While filming last winter on Wekusko Lake, Purpledescent was the hot color pattern. “For some reason, these walleyes like purple,” Haash says.

Search baits like Jigging Raps and Rippin’ Raps often yield vicious strikes from big walleyes. Haash’s observations following Jigging Rap bites on Wekusko Lake include “he charged off the bottom and just hammered it,” and “when he came, he came with a vengeance.”

Walbeck, Haash and Bogdan’s Wekusko Lake walleyes came out of 18 to 22 feet of water on deep edges of reefs.

Outdoor Bound TV airs in the U.S. on Midwestern ABC stations and in Candada on Wild TV. For the past eight seasons, Walbeck has hosted fishing and hunting adventures for millions of viewers. He cut his teeth on the famous walleye waters and woods of Northern Wisconsin, learning his craft at an early age, serving as a guide to many NASCAR legends who, in the off season, ventured north to hunt and fish with his father, auto racing legend Marlin Walbeck.