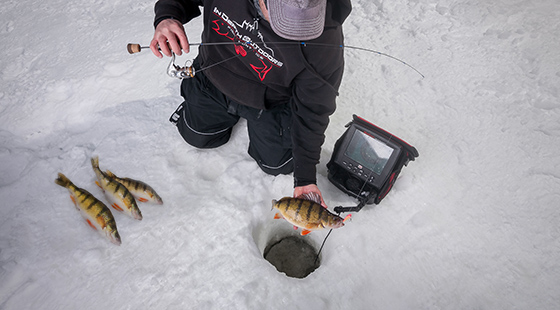 When you can track and judge a walleye’s position and temperament from the edge of your sonar cone to within a half inch of your bait, you’ll know better when – and when not to – set the hook. That advantage will put more fish on the ice. That’s the MarCum digital advantage.

“And that’s a big reason to upgrade from a traditional mechanical flasher to a MarCum digital unit,” says ICE FORCE pro Joel Nelson, a familiar face and name in ice-fishing media, both online and on-screen. “The cool thing about digital sonar is it opens up a whole new world of possibilities.”

Digital display customization, which Nelson calls “the pinnacle of fish-finding technology,” helps anglers get more bites and catch more fish. “You can configure the digital units any way you want,” he says.

Each of MarCum’s digital sonar units, the LX-6s, LX-7 and LX-9, give anglers multiple display options – water-column vertical, vertical zoom, flasher-dial and a scrolling horizontal LCD graph. “A lot of guys will run a flasher dial, vertical zoom bar and scrolling graph, side by side by side,” Nelson says. Each display provides valuable intel on a fish’s location and willingness to bite as it moves into your sonar cone and closer to – or further from – your bait. Being able to track a fish on multiple displays as it gets closer to your bait helps put more fish on the ice.

Vertical Zoom Display
When there’s a lot of fish onscreen, Nelson still relies on his digital unit’s circular flasher-dial display, he says. “But when I really want to work a fish that’s showing interest in my bait, vertical zoom is key in helping me get fish to close,” Nelson explains. “You attract them from afar on other parts of the screen, then seal the deal on the vertical zoom display.”

MarCum’s LX-7 and LX-9 both feature target separation down to a half an inch. That means a fish must move to within a half-inch of your bait before the glowing bar representing it on your display merges with the bar that represents your bait.

“So if those bars touch in the vertical zoom display, your bait’s almost surely already in their mouth by the time you set the hook,” Nelson says. “But as long as those bars are still separate, I know the fish hasn’t made a play on the bait yet.”

Anglers using sonar units with lesser target separation and no vertical zoom display will often set the hook prematurely and scare off fish.

“Bluegills are notorious for coming right up to your bait but not biting,” Nelson says. “But in a lot of sonar units, it will look like the marks are connected, so you’ll think your bait’s got to be in the fish’s mouth. So guys will set the hook prematurely – swing and completely miss. And with big bluegillsm especially, it’s game over – they’re gone. They won’t tolerate that.”

Using a MarCum digital unit’s vertical zoom display, however, provides more precision and detail in seeing exactly what’s going on down below. “You’ll start to notice that when it’s in zoom, you’ll get better results from working a fish,” Nelson says. “I feel like I spook less fish and that I’m in the game better and longer by avoiding those premature hooksets.”

Scrolling Chart Graph
A MarCum digital sonar unit’s scrolling chart graph – a display like you’d see on your boat in open water – also provides valuable intel on where a fish is located and when it’s likely to bite.

“If a fish I’m working on the vertical zoom display backs away, doesn’t bite, doesn’t commit, I can look over at that scrolling graph and see how the fish came into the bait by looking at the line it ‘draws’ with its movement,” Nelson explains. “That line gives me clues as to what the fish might want and I can adjust my presentation accordingly.”

A walleye interested in your bait will first appear on a scrolling graph as a horizontal line on, or just above, the bottom and below and parallel to the line your bait is creating. A walleye can telegraph his interest level in your bait with the angle at which his line rises from the bottom toward the line that’s your bait.

“A hot walleye” rising quickly to overtake a bait will draw a streak of 45 degrees or greater, Nelson says. That’s a walleye ripe for the catching. But walleyes rarely commit so quickly.

That pattern is your cue to experiment with your jigging stroke. “Do one or two different things to trigger a bite,” Nelson says. When you see an obvious change to the “meandering line” the fish has been drawing, you should anticipate a bite and prepare for a hookset. “You know when the fish is hot because he comes back differently,” Nelson explains. “Suddenly, he’s not meandering any more. He comes straight up to the same level as your bait.”

That’s your cue to switch your gaze to your MarCum’s vertical zoom display and prepare for impact. “Because a lot of times, these walleyes will just pop it and drop it,” Nelson says. “And if you’re not ready to set the hook, you can screw it up. So it helps cue you in so you do your part right.”

“All the features available in mechanical flashers are available in digital series, and then some,” Nelson says. “So people need not worry when they don’t see a zoom button or a sensitivity gain curve knob. All that same information is there in the digital series and MarCum does a really good job of having the most commonly used features in buttons on the bottom part of that screen.

“So you don’t have to dig deep into menus to make your standard adjustments,” Nelson continues. “You’re not hunting and pecking for an obscure item in some menu, three or four deep. It’s pretty apparent, right there at the bottom of the unit itself.”

“It’s like a JumboTron for your permanent ice house,” Nelson says. What’s more, the LX-9’s built-in DVR provides screen recording and instant on-screen playback. It can record also to a separate SD card or a via a video-out cord. “Functioning almost like an entertainment center, it can do a nearly endless number of things no other ice electronics unit can do,” Nelson says.

Another advantage the LX-9 offers is the ability to monitor two holes at the same time, on the same screen. “You monitor one with your underwater camera, the other with sonar,” Nelson explains. “Which is great when you’re jigging one line and dead-sticking a second.”

Display options include:
•   Split screen – Underwater footage is shown on one side of the monitor, sonar display on the other side.

•   Heads Up Display (HUD) – The sonar image is super-imposed over top of the underwater footage, making it possible for the angler to see both images at the same time on the same screen.

“No other ice electronics unit can do any of this,” Nelson says. “And when you can see the results up on your ice house big-screen, it’s all that more impressive.”