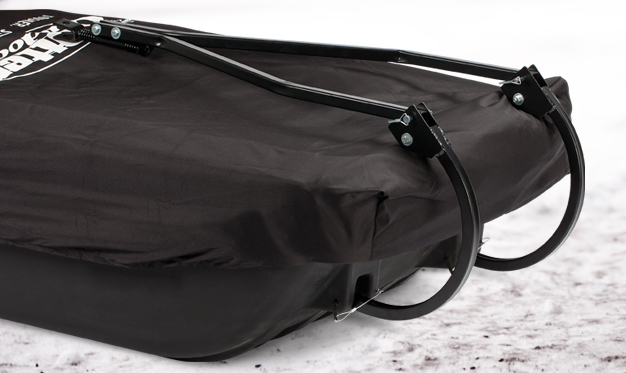 Not with an Otter Outdoors Hitch Pivot on your sled – or “tote,” in the animated parlance of ICE FORCE Pro-Staffer and fishing-media personality Chip Leer.

Once you’ve installed an Otter Hitch Pivot, “you never have to disconnect your hitch from your tote ever,” Leer says, flashing his ever-present thousand-watt grin. “Ice fishing just got much easier!”

A perfectly designed U-shaped assembly that attaches between your sled and standard sled-tow hitch, Otter’s Hitch Pivot is an elegant solution to one of ice fishing’s long-standing challenges.

“When it’s cold and you’re loading sleds in and out of trailers, or the back of your pick-up, what happens is it become very difficult to reach underneath the bow of the tote … to get that hitch pin connected,” Leer explains. An Otter Hitch Pivot solves that problem by making it unnecessary to routinely connect and disconnect your hitch from your sled.

You can watch Leer demonstrate how to attach and operate the Otter Hitch Pivot in this video.

The Hitch Pivot solves another persistent challenge for ice anglers – fitting your sled into your truck or trailer.

“As the owner of a smaller truck … fitting any ice shelter in the back of the truck has always been snug, to say the least,” says ICE FORCE Pro-Staffer Joel Nelson. “However, even if I owned a full-size truck with a long box, you can fit sleds in, but never the hitch.”

And that meant removing the hitch after every outing and re-attaching it the next time out – a ritual that often resulted in lost time (and lost hitch pins).

“Fumbling with cold fingers and small hitch pins in snow that usually makes everything disappear, had always been something we just dealt with,” Nelson says. No longer though, thanks to Otter’s Hitch Pivot.

“Everything is attached, ready to go,” Nelson says. “Slide the house out the back, pivot the hitch and roll!”

Roll indeed. An Otter Hitch Pivot will in no way slow your roll on the ice.

“The way it’s designed, it works like a standard, rigid hitch, so when you speed up, the sled comes with you,” Leer explains. “When you slow down, the sled’s going to slow down at exactly the same pace.”

In the last year, Otter National Sales Manager Troy Tufto has seen “the lightbulb go on” over more and more anglers’ heads when they see the Hitch Pivot in operation for the first time.

“It’s simple engineering that works,” he says. “If you and your buddy go ice fishing and you have a Hitch Pivot and he doesn’t, he’ll have one next time!”

See a photo of Nelson’s sled perfectly fitting into the back of his truck here.

Rear Hitch Reciever
Whether you’re hole hopping or lake hopping, Otter Outdoors’ towing solutions put you on fish faster – and with as much gear as you could ever need.

“If you’re like me, you carry a lot of gear when you go ice fishing,” Leer says. “Otter has the perfect answer for those of you that like to carry more than one tote.” And without homemade “contraptions that continually break.”

“So you can now carry two, three, four sleds all in a train,” Leer explains. “You can carry all your gear, all your friends’ gear – you can take it all! Because this is designed for maximum amounts of weight.”

On the inside of your sled, a big, steel Backer Plate disperses torque. On the outside, a specially engineered hitch pin (included) attaches your rear sled’s tow hitch to the Receiver Hitch.

“You can put these on the back of all your totes and next time you go fishing, you’re not only tougher, you are a lot smarter,” Leer says. “And that’s the Otter way of doing things on the ice.”

Leer demonstrates operation of the Receiver Hitch in the video above.

Sturdy, Roto-Molded Sleds
Although both the Hitch Pivot and Receiver Hitch will work with any brand sled, anglers will get better performance and more years of service from an Otter sled.

All Otter sleds are constructed by roto-molding polyethylene, a type of heavy-duty plastic. The process results in a stronger sled, because it allows for no thin spots. Some other sleds – those made in the same way backyard kiddie pools are made – are thin and weak at corners and other stress spots. Inferior sleds often shatter in the cold. Otter sleds do not.

“Roto-molded Otter sleds are durable and flexible down to 40-below-zero,” Tufto explains. “They’re going to resist the cracking and shattering you’ll get with inferior, thermo-formed, or blow-molded, sleds.”