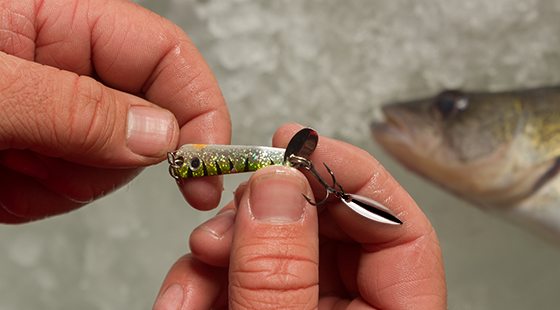 VMC’s new Bladed Hybrid Treble, the tweak that makes fish freak, will work its magic through the ice as well as it does in open water. Add one to your VMC® jigging spoons and Rapala® Jigging Raps to catch more and bigger walleyes this winter.

“When you’re jigging with it, you get the added flash of that blade,” says Ice Force Pro Brad Hawthorne, an in-demand Minnesota guide. “It’s really a cool deal. I’m actually wondering how we’ve gone so long without this, it seems so must-have now!”

The Bladed Hybrid Treble makes baits extra-fishy by being extra-flashy. It comprises a small silver willow blade attached by a resin-sealed swivel to the back of a 1X-strong, wide-gap, short-shank, high-carbon steel VMC Hybrid Treble. In-Depth Outdoors TV host James Holst is among leading ice anglers who will be fishing this winter with bladed trebles on select baits. “A little extra flash and vibration will be especially helpful in stained and dirty water,” he says.

Because it’s suspended on a swivel, the Bladed Hybrid Treble’s willow-leaf blade can rotate 360 degrees, so a bait’s built-in action can make it kick out in any direction. Each time it does so, it will catch any light penetrating the water column and flash. That’s what makes it a great addition to a VMC Rattling Spoon, says Ice Force Pro Joel Nelson.

“I like it for the types of spoons that tend not to have as much flash, roll, or action on their own,” says Nelson, an ice-fishing expert featured on Angling Buzz TV. “That’s where adding the Bladed Hybrid Treble gives you the perfect trifecta – rattle, color and flash.”

Hawthorne this winter will fish his 2-inch VMC Tingler and Tumbler Spoons with Bladed Hybrid Trebles.

“It makes those spoons really erratic,” he says. “It can make them drift head first, it can make it go sideways. There’s no way of predicting how it’s going to go.”

A Bladed Hybrid Treble will slow a spoon’s fall rate by about 40 percent, Hawthorne estimates. “When you jig up and that blade catches the water, it’s slows it right down,” he says.

Another benefit of rigging a jigging spoon with a Bladed Hybrid Treble, Nelson says, is that it enhances the bait’s profile without decreasing its hooking percentage.

“There’s a lot of people who will use a whole minnow on a jigging spoon in order to make it twice as long and make it a more enticing snack to bigger fish,” Nelson explains. “But sometimes the problem with that is you get short strikes. The cool part about this bladed treble is it will bulk up your presentation without being too long that you get short strikes. So you can go ahead and just tip with a minnow head or plastic.”

A Bladed Hybrid Treble can improve your hook-up ratio with Jigging Raps as well. Fish will instinctively attack the flash in the center of the bait.

“That blade makes it a focus point, so get a lot more fish T-boning that bait, rather than just nipping at ends or tails,” Nelson says.

A Bladed Hybrid Treble will also give a Jigging Rap a distinctive, slower fall.

“When you put it on the belly hook, it acts kind of like a parachute and causes the bait to drift sideways and kind of pendulum down in a wider jigging circle, which is really awesome,” Hawthorne says.

“You’re still going to get a decent amount of glide, with a slowed-down action,” he says. “Especially walleyes, when they’re super finicky, you don’t want to be making big sweeps and swings with a Jigging Rap®. They’ll come up from below and hit that bladed treble.”

VMC® Hybrid Treble hooks are available in four sizes: 2, 4, 6 and 8. The No. 8 size fits well on larger jigging spoons and Jigging Raps, making it mostly a walleye tweak. That being said, “there are times where you can upsize for some really big, trophy crappies,” Nelson says. “Perch too. A good-sized perch will definitely eat a big, minnow-size bait.”