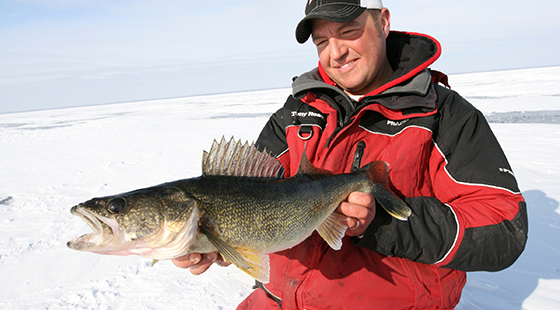 Rapala Jigging Raps, Rippin’ Raps and Slab Raps will all draw fish from far under the ice and into the strike zone below your hole. Knowing which one to tie on when will help you catch more and bigger fish this winter.

“All of them can be deadly any time of year, but as a rule of thumb, I’ll rely on different ones at different times as my go-to ‘search’ bait,” says in-demand Minnesota fishing guide Tony Roach, an ICE FORCE® pro.

Roach’s rule-of-thumb search-bait schedule is this:

Slab Rap®s later in the season

Of course, there’s always exceptions to the rule. Following is an in-depth look at when and why Roach uses each bait to put more fish on the ice.

Jigging Raps are Roach’s “go-to baits” for early ice,” he says, because they fall with an erratic swimming motion that matches the mortal struggle of minnows that won’t survive ‘til spring.

“Early ice in particular, you get a fair amount of young-of-the-year die-off, so those fish will really be keying in on Jigging Raps then,” Roach explains.

Weighted and balanced to perfection, Jigging Raps simulate the erratic characteristics of a wounded baitfish better than any other lure under the ice, swimming in tantalizing circles on the fall.

“Even when you drop it on a slack line, it’s going to kind of pendulum out, swimming outside your sonar cone and darting back,” Roach explains. “It gives you a wider jigging action than any other bait out there. It gives you horizontal coverage with a vertical presentation better than any other bait. It also gives a cat-and-mouse kind of feel. The fish are apt to chase it.

With single reversed hooks on the nose and posterior, and a center treble hook hung from a belly eyelet, Jigging Raps don’t allow for misses — regardless of how a fish attacks, its running smack dab into a hook. They fall faster than Rippin’ Raps and Slab Raps.

“It’s a fantastic bait for early-ice, but also when fish are really aggressive throughout the season in the day-time hours,” Roach says. “During bright, day-time hours, I’ll go to more natural colors – your Blue Chrome, Silver and Perch,” he adds. “In stained water, I will use UV colors.”

Jigging Raps comes in five sizes, from the 1 ¼-inch W2 (great for perch and crappies), to the 3 ½-inch W9 (a meal for walleyes, pike and lake trout). They are available in 26 color patterns, three of which are UV (Green Tiger UV, Orange Tiger UV, Pink Tiger UV).

To prevent line twist, tie a Jigging Rap to a leader line attached to your main line by barrel swivel. Three feet is a good leader length. Roach’s Rippin’ Rap bite will often overlap with his Jigging Rap bite, with one being better than the other based on light and water clarity. While Jigging Raps are best in daylight, Rippin’ Raps often draw more bites at dawn and dusk, or in really stained water.

“In those situations, I like Rippin’ Raps, because they’ve got a rattle that can help those fish hone in on your bait,” Roach says. “And this is when your UV colors are key. That UV, it’s like a beacon in the night.”

Rippin’ Raps will transition from complementary baits to go-to producers later in the winter as fish become much more selective feeders and strike zones shrink, Roach says. “When they’re really not willing to go outside their strike zone to hit something, that’s where I like to fish more up-and-down presentations like the Rippin’ Rap,” he says.

Roach’s winter Rippin’ Rap bite really heats up “when we’re fishing a little bit deeper and the fish are somewhat suspended,” he says. “I’ll fish a Rippin’ Rap a lot higher in the water column then than I would a Jigging Rap.” Because fish feed shallower at dawn or dusk, this bite is generally best during the day, so tie on Rippin’ Raps in natural colors, rather than the UV patterns. Slab Rap
The Slab Rap is Roach’s mid-winter finesse search bait. When he sees evidence on his MarCum digital flasher that fish are following in Jigging Raps or Rippin’ Raps, but won’t bite them, that’s a sign to switch to a Slab Rap.

“When they’re really keying on Rippin’ Raps or Jigging Raps, but just won’t fully commit, a Slab Rap’s a great alternative,” Roach says. “It has a real slow, subtle fall, yet it still has enough action to draw fish in,” he says. “It triggers bites with a similar action.

Retrieved with quick rod snaps in a lift-drop cadence, the Slab Rap vibrates subtly on the rise, then searches in wide, erratic directions, circling back to center on the fall. Its center line tie and weight-forward design enables a rocking action to further trigger bites from negative fish.

“You can add really subtle movements without a lot of action, because of the weight,” Roach says. “So it’s great for panfish and finicky walleyes when the bite’s a little tougher. It was really eye-opening last winter how many fish I caught on that thing.”

Slimmer and narrower than a Rippin’ Rap, the Slab Rap becomes more of a go-to bait in the late-ice season. “I really like the profile on the Slab Rap for later in the winter, for walleyes and perch in particular,” Roach says. “It looks exactly like the young-of-the year prey they’re feeding on.”