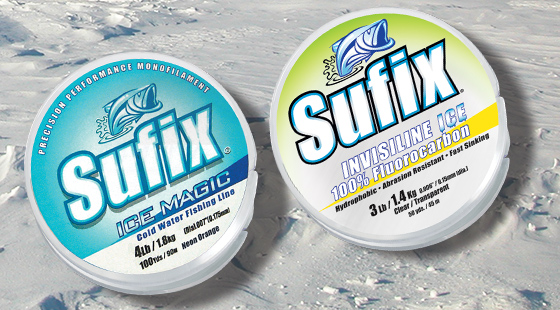 Early ice is panfish time. To get the most bites, pair your best panfish baits with the right Sufix line. Too light a line can result in break-offs, but too heavy a line can alter action, causing fish to give your bait the brush off rather than a bite.

To help you pair the best panfish baits with the right line, we asked Freshwater Hall of Fame Legendary Guide Tom Neustrom for his advice.

Bluegills
Because bluegill baits are so much smaller than walleye and pike baits, lighter line is need to make them react correctly to subtle jigging strokes. “A lighter line allows you to use much lighter baits much more effectively,” Neustrom explains.

So he strings his ‘gill rods with 2- to 4-pound test Sufix Ice Magic monofilament, which is much thinner than most other monofilaments used on the ice. “It’s really soft and supple and performs really well,” Neustrom says. “And it’s very consistent and has very good knot strength.”

Made with special additives to prevent water absorption, Sufix Ice Magic mono deters ice build -up on your line, guides and spool. At any time, in any temp, you can count on it to remain soft, flexible and strong. Additionally, it sinks fast for a more natural presentation.

The bluegill baits most likely to be tied at the end of Neustrom’s Sufix Ice Magic mono this season will be VMC Tungsten jigs dressed with tiny Trigger X plastics or live waxies.

“The Tungsten Fly Jig was really good last year,” he says. “And my favorite is the Tungsten Tubby Jig. That’s one of the best baits in the winter. All those little VMC tungsten baits – when you get them down to the fish, they eat them.”

Crappies
Neustrom spools his crappie rods with 3-pound-test Sufix Invisiline Ice 100% Fluorocarbon. “The fishability and manageability on the spool is better than we ever had before Sufix brought out this fluorocarbon that’s made specifically for ice fishing,” he says.

Neustrom’s best crappie baits over the last few years have been VMC Tungsten Tubby Jigs, No. 3 Jigging Rap and VMC Flash Champ Spoons. When tied to 3-pound-test Invisiline ICE fluoro, he says, “all three will work pretty much all through the season.”

And they work best when they get down to the fish in flash, rather than lollygagging their way down to the strike zone. Which is another reason Neustrom fishes them on Sufix Invisiline ICE Fluorocarbon, which sinks four times faster than monofilament line.

“It allows you to get your lure back down to the fish so much faster when they’re biting,” he explains. “That can make a big difference, especially when you’re in a bit deeper water and a school is on the move. You want to get back down to them as fast as you can before they move on.”

Sold in 50-yard spools, Sufix Invisiline ICE fluoro comes in 2 lb. to 7 lb. test in the only color you need, the practically invisible Crystal Clear.

Start Fresh
Because ice-fishing reels are so small, it’s important to spool up fresh Sufix line before each new season. Small spools cause coils, and coils cost you bites.

“Line coils are like a spring, and they will absorb all the subtle movements you make with your rod tip, preventing that action from imparting to your bait,” Neustrom explains.

The longer fishing line resides on a spool, the more “memory” it will have. The more memory it as, the more likely it will be to jump off your reel spool like a spring and ruin your jigging action.

Ensuring line strength is another reason to re-spool with fresh Sufix before the start of a new season on the ice.

“Not only are the edges of ice sharp, there’s a million things in your ice house, sled and garage that could have grabbed, nicked and weakened your line between the start of last season and when you hung up your rods last spring,” Neustrom says. “If you don’t re-spool, it’s not if you’ll break off a big fish, but when.”

For the same reason, periodically removing some line throughout the season is essential as well. “You don’t have to start from scratch and re-spool mid-season, but you do want to remove sections of line that get a lot of wear and tear,” Neustrom explains. “Simply peel off 25 to 30 yards every three or four outings, and then re-tie your baits.”

To prevent line twist when re-spooling, lay your new spool label-side down, run the line through a big book to put little pressure on it, and then reel slowly, making sure the line is coming off the spool in a counter-clockwise direction.