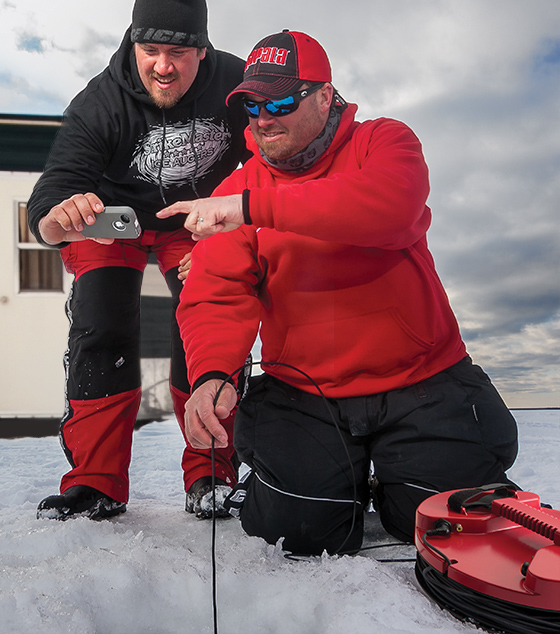 Want to hole hop around an ice house while monitoring the action on a line inside it? Hook up a PanCam Camera System and pull out your smartphone.

MarCum’s innovative remote-viewing underwater-camera panner system allows you to fish in one hole while simultaneously using your smartphone to monitor live footage from an underwater camera as far as 300 feet away.

“It’s like the grass is always greener on the other side,” ICE FORCE Pro Brad Hawthorne says. “Even if you’re catching a pile of fish in one hole, you’re always wondering if there might be more and bigger fish in another hole. Now you can be in two places at once. Which is pretty cool.”

Paired with a free app that turns your fishing hole into a wi-fi hotspot, a PanCam Camera System transmits a live stream from an underwater camera to any iOS or Android smartphone or Tablet..

When linked into a PanCam system, your phone will serve as both a camera monitor and remote control, allowing you to change camera directions, adjust lighting, and record underwater video and still images. Just swipe your finger on your phone’s screen to rotate your camera left or right for full, 360-degree control.

“If you’re working a number of productive holes, you can link cameras in all of them and monitor activity in the ones you’re not presently fishing in,” Hawthorne says. “When a school shows up again in a hole, you’ll know in real time, and can pull up get over to that hole in time to drop to those fish and get some bites.”

“So not only can you post pictures of you holding up the big fish you catch, you can share screen-grabs and videos of those fish hitting your bait!” Hawthorne says. “And you can do it all right from your phone, easy as can be.”

The PanCam Camera system can network multiple underwater cameras to one phone or tablet, empowering multiple anglers in a group to simultaneously access the camera’s live feed with their smartphones. MarCum’s PanCam device can be purchased with or without a camera.

The full PanCam camera system comes with the following: