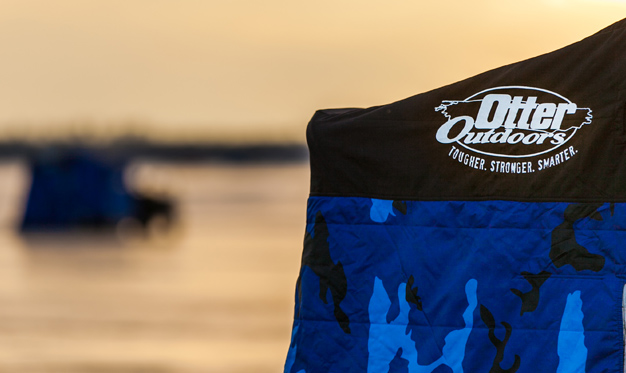 In a perfect world, ice anglers would never need to leave biting fish. But when the mercury falls and the wind rises, some fishermen do.

But not you. You don’t take orders from Jack Frost. You don’t get off the ice until you say its time. You live in fishing’s perfect world. You’re in an Otter Outdoors Xtreme Thermal ice house.

“A fully insulated Otter warms sufficiently from just your body heat, allowing you to fish all day in comfort, no matter what the weather outside,” says ICE FORCE Pro-Staffer James Holst, host of TV’s “In-Depth Outdoors.”

He knows from experience.

Turn back the clock to December 2011. Holst and fellow ICE FORCE Pro-Staffer Joel Nelson are filming a Lake of the Woods walleye show segment in 25- to 30-mph winds and a driving, soaking powder snow.

Lake of the Woods Walleye Segment

They’ve taken refuge, fishing from inside a then-new Xtreme Thermal Otter Pro, but their propane heater is broken and they don’t have a spare.

“This might be the toughest day of fishing – just from a conditions standpoint – that I can remember in a long time,” Holst says on camera, wearing just bibs, a baseball cap, hoodie and no gloves. “Today, I couldn’t be happier to be inside this insulated Otter.”

Concerned about the brutal conditions and broken heater, the intrepid anglers briefly considered calling it a day. But convinced they could get back on a great bite they’d enjoyed the day before, they decided to stick it out, trusting the Otter Pro to push back the cold and hold in their heat.

Turns out, they didn’t need a heater.

“Our body heat is keeping us more than warm enough,” Holst says in the show, noticing that his breath is not even visible inside the Otter’s cozy confines. “That’s quite a testament to what a little insulation will do to make it much more comfortable out here for an angler.”

Holst ices an eater walleye, but acknowledges that as the day wears on, they’ll have to move to stay on the bite. A point Nelson expands on when the camera moves to him.

“If ever there was a day where we should put up the Otters, sit still and not move, today would be that day,” he says. “But we’re just not that style. We’re going to go out [further]. We need to check more spots. … We’re going to push out [deeper].”

It’s this brand of angler passion, even in extreme conditions, that has led Otter and other ICE FORCE brands to innovate with products as tough as the fishermen that use them.

“Those are the kinds of things that keep us fishing on days like today, even when [the weather] is not so great,” Nelson says, addressing the camera and then preparing to unzip the flap on his Otter. “So, out I go into the wild blue yonder!”

Shortly after setting up on the next spot – the sixth or seventh of the day – Nelson pops two fat, eater ‘eyes that will make a nice hot meal later.

“These are the days you go out there and you earn it,” he says, the two eaters on the ice at his feet. “Every fish you catch, you feel a little better about, because you know that what it takes to catch ‘em is about ten times more than most people are willing to go through.”

Shortly thereafter, Holst reels in a gorgeous 26-inch walleye, a hard-won treasure after a long day in brutal conditions.

“We got it done, sun-up to sun-down,” Holst says, preparing to conclude the show. “I never want to give up, I never want to leave the ice thinking I left something on the table.”

“In the past, we would have been forced to retreat to shore in search of warmth and dry clothes,” he said recently in a phone interview conducted as he was driving to Cass County from Lake of the Woods, where he had just filmed another show segment in similar conditions. “But we got a great show under our belt, and we owed it all to the fully insulated Otter shell.”

Warmer
Holst is still fishing out of Otters and still singing their praises.

“They’re just warmer – period,” Holst says of insulated Otters. And should you not want to rely on body heat to warm your shack as he did, you can use a smaller heater and burn less propane. “And that saves money.”

Quieter
Insulated Otters are quieter too.

“Canvas or nylon houses flap, slap and crack like a flag in the wind on blustery days, often times getting so loud that it’s hard for people inside to communicate without shouting at each other,” Holst notes.

Drier
Another plus – no condensation precipitation.

Un-insulated canvas houses often rain down on their occupants drops of water from the ceiling, especially when a heater is running on a cold day. And that’s no fun – particularly when a big gust of wind buffets the canvas, dumping a huge splash on unsuspecting anglers.

“I don’t miss those seeing-eye moisture missiles finding their way down the back of my neck,” Holst says.