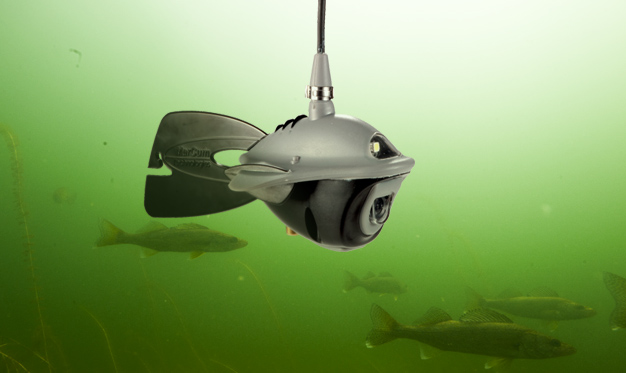 One of the best times to use an underwater camera to find and catch walleyes is when ‘eyes are looking for weeds in the late-ice season.

“While an angler could punch a series of holes and drop a lure with the intention of snagging bits of vegetation to check for good growth, nothing beats seeing the condition of the surroundings underwater with your own eyes,” says ICE FORCE Pro-Staffer James Holst.

He uses a MarCum 625 SD. A lightweight color model with a 6-inch monitor, it features the highest quality Sony Super HAD II cameras available, offering a clear image of the underwater world that leaves no doubt if an area needs further investigation or not.

“Using a camera to pinpoint the exact weed clump to be fished, precisely where to drop a sucker under a tip-up is key to late-season weed walleye success,” Holst says. “That wouldn’t be possible without the ability to visualize the underwater surroundings with an underwater camera like the 625 SD.”

It’s not easy finding green
Early in the winter, green weeds are easy to find. They’re everywhere and walleyes are found lurking around the edges of the thickest, most dense growth waiting to ambush an easy meal.

Fast forward to late February in a winter with heavy snowfall and those once lush and expansive flats covered with healthy green weeds have now largely died off, due to the lack of light penetration caused by thick ice and snow cover overhead.

“What’s left in the place of those once healthy stands of cabbage and coontail is often brown and slimy – the last place baitfish or any other prey would ever seek refuge,” Holst explains. “Certainly not a place where an angler would want to drop a tip up or spend any time fishing a spoon. As the food source goes, so do the walleye.”

But not all weed growth suffers the same fate. In even the longest winters with the heaviest snowfall, some healthy, green and lush vegetation survives. And while locating green weeds is more difficult in the late season, the good news is that they hold more walleyes than they do in the early season.

The better news is that MarCum underwater cameras make it much easier to locate those green needles in a liquid haystack.

“One of my favorite features of the 625 SD is the directional arrow that let’s me know which way the camera head is pointing,” Holst says. “This is very handy, because it lets me know the direction I need to move to close the distance on anything the camera reveals underwater.”

This helps him quickly locate the thickest clumps of vegetation and punch holes alongside the weed clumps he saw on the camera. He doesn’t fish directly on top of the thickest thatch of vegetation, but rather just off of it.

“MarCum calls this Solar Intelligent Display,” Holst says. “I call it ‘easy to read in the midday sun.’

No other camera from another manufacturer even comes close to being as bright, as daylight-viewable, as the MarCum cameras, he says. “When I’m on the search for a needle in a haystack, hopping from hole to hole, I need a camera that can be viewed in bright conditions.”