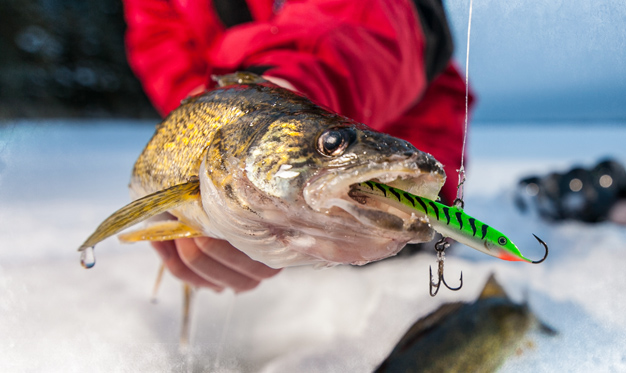 As the days lengthen as we lean into spring, walleyes begin to shake the winter doldrums. Today, three ICE FORCE pro staffers leak their best tips for getting back on a good ‘eye bit in the late-ice season.

Roach gets in their face
The key to late-season success is keeping on the move, preaches the infamous ice troller, Tony Roach.

“And be prepared for any type of weather conditions, as the fish will move up and down structure with the changing weather,” he advises.

“The fish might be less aggressive with high-pressure, cold days, so you need to place the bait very tight to the fish,” he explains. “Their strike zone will be smaller, but if you get close they will eventually bite.”

Roach cut his teeth fishing on Mille Lacs, where mud is king.

“If you can find varying depths of mud, you can chase the fish up and down depending on the conditions,” he says.

He likes to utilize the entire day, testing spots in the morning, finding fish in the afternoon, and then setting up on them again in the evening. He favors smaller baits for February walleyes – small Jigging Raps and small deadsticked shiners or rainbows.

“A lot of activity is happening on the mud, as the sun gets stronger,” he says. “There are hatches happening every day, attracting perch. And with perch the walleyes will soon follow.”

Among Svihel’s must-haves is a digital MarCum sonar unit with a 6-color setting. He says it’s imperative to detecting fish, which wouldn’t ordinarily show up with the standard 3-color mode.

“When I see blue returns flickering off the bottom in mud, I know there’s a hatch going down,” he says. “I couldn’t find a lot of my bites without MarCum’s 6-color mode.”

Nelson ‘takes their temperature’
Joel Nelson uses a combination of Roach’s and Svihel’s techniques to coax walleyes to chow down.

“I will start very aggressively with my jigging stroke try to ‘take the temperature’ of the fish, and feel them out,” he explains.

He will jig his baits six to eight feet off the bottom. If fish react with quick movements toward the bait, he will continue with that technique.

“If they react positively, but don’t eat, I’ll keep switching colors or slightly alter my presentation until they decide to commit,” he says.

His go-to rig is a bronze VMC 9299 octopus hook with a split-shot crimped six inches above a free-swimming shiner.

“Pair this with an aggressive rattle or blade bait and you have a great diversity to attract and seal the deal for late season walleyes,” he says.