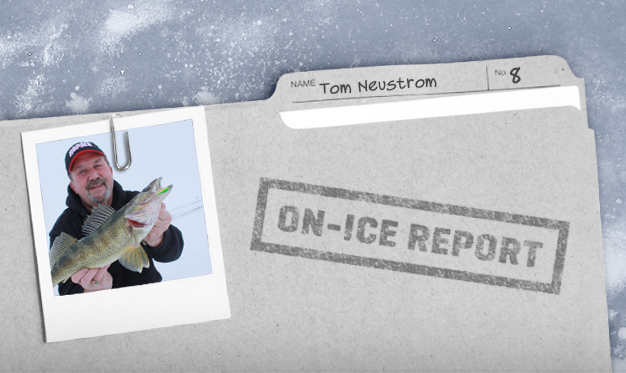 Sight fishing on the ice? Now you’ve seen it all. That’s how ICE FORCE Pro-Staffer Tom Neustrom weeds out big ‘gills in the late-ice season.

To set up his sight-fishing technique, Neustrom locates thick and heavy vegetation and then drills two holes above them as close to each other as possible. He then chips out the ice between the holes, creating what he calls “the snowman,” owing to its stacked-circles shape.

Looking down through the double-wide hole gives Neustrom a better view, “so I’m able to pull my bait away from the smaller ‘gills and catch the bigger ones.”

He fishes a small jig tipped with a tiny soft-plastic bait or – if the ‘gills are being finicky – euro larvae or waxworms. Black and white plastics are usually the top producers.

Not all weeds created equal
Neustrom’s first tip for locating big bluegills this time of year is that not all weeds are created equal. His first priority is to find the greenest cabbage beds he can. And he gets right into the thick of things.

“A lot of people shy away from fishing right in the thick stuff and tend to focus on weed edges,” he says. “But where there is good vegetation, there are good bluegills.”

In amongst the thick stuff, he’ll look for small open patches, which ‘gills use to ambush prey. The second key to finding big gills in greenery is to locate weed beds in close proximity to deep water.

“The weed patches I am fishing are in eight to 10 feet of water, with deeper water of 10 to 20 feet within a close distance,” Neustrom says. “This allows the fish the ability to move into deeper water during cold front conditions.”

Keep moving, drilling
It’s crucial to stay on the move, punching a lot of holes in order to stay on the fish, Neustrom stresses. He often drills eight to 10 holes before finding active fish. The same holds true if you’re catching only small fish.

“I fire up my Honda-powered Strikemaster auger and punch holes until I find the big ones,” he says.

After locating a healthy pod of bluegills, Neustrom sets up his Otter Outdoors ice house and shuts all the windows, which allows him to get a better view of the fish down through his “snowman” hole.

Trending towards March
Neustrom’s weed bite is just starting to heat up and will likely improve as spring approaches.

“This bite started a couple of weeks ago, and I am going to fish it until the ice is out,” he says.

This bite has been effective for him in previous late-season periods on lakes in and around his home base of Grand Rapids, Minn. especially on his home water, Lake Pokegama.