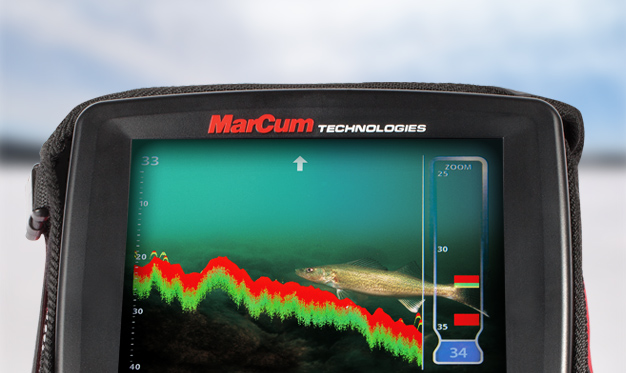 What if you took the most advanced ice fishing sonar on the market and merged it with the highest-resolution underwater camera?

You’d get the MarCum LX-9. Welcome to the future of ice fishing.

Infused with MarCum’s full menu of famed patented sonar features, the LX-9 is the culmination of a decade of intelligent sonar engineering. An 8-inch flat panel color LCD plays live underwater video, multiple user-defined sonar displays – or both simultaneously. The readouts actually merge into a single, easily viewable image. And industry-exclusive Sonar Footprint Technology displays your area of bottom coverage at any depth.

A built-in DVR even provides screen recording and instant on-screen playback. The unit can record also to a separate SD card, or via video-out.

MarCum’s intelligently managed sonar engine is driven by a cool 4800-watts PtP with a switchable Dual Beam (8o and 20o) transducer. And power matters – just ask the fish exposed by MarCums that can easily elude the low wattage pushed by other brands.

“The ability to simultaneously compare vivid sonar renderings with actual underwater video advances our fishing skills and underwater perception by light-years,” Roach says. “And with a built in DVR, anglers can immediately capture, upload or review underwater events. This is a truly remarkable piece of technology.”

The entire LX-9 system comes sheathed in a special padded softcase with a rechargeable 12-volt, 9-amp battery, automatic charger and Snow Shield Faceplate. It even includes MarCum’s exclusive Auto Camera Panner for the full underwater video viewing experience – 360-degrees of fishiness in the palm of your hand.

“We remain one-hundred percent invested in the precepts of innovation,” says MarCum Brand Manager, Jon Marshall. “LX-9 is the brainchild of this passion and dedication – it’s the meeting of two essential fish-finding technologies, bringing together for the first time digital sonar and live color underwater video into a single portable unit. And with its built-in DVR function, the powerful images that scroll across the screen will be captured, replayed and shared via other portable electronic devices.

Loaded with features and functions, LX-9 is a fish-finding marvel waiting to explore, and to be explored. Visit MarCum’s website to discover this and other powerful MarCum technologies, and to initiate your own underwater surveillance mission.