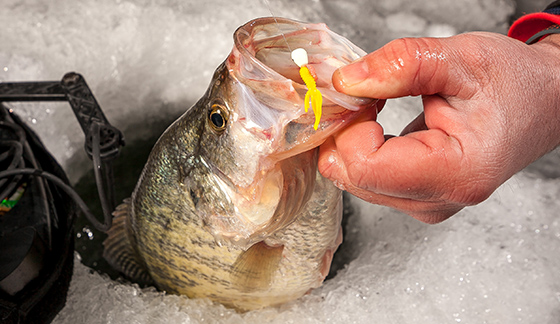 Smaller VMC® spoons, Trigger X® soft baits and Rapala® jigging baits are all putting fish on the ice this month, report ICE FORCE™ pros from across the Ice Belt.

“When there’s no fish on the screen, I’m using a large jigging action and getting that bait to move around inside of a three-foot circle,” Hawthorne explains. “After I draw the fish in, I just let them look at it while I’m just shaking it, keeping that bait quivering. Then bam! They’ll hit it.”

“Those three baits have been putting crappies on the ice for me consistently,” Neustrom says. “This has been a winter of adventures and being able to access lakes with good ice-fishing opportunities.”

“We’re getting some dandies right now — into the 14-inch category,” he says. “You don’t have to go to Wisconsin or South Dakota to get them! My clients have really been loving that.”

Upper Red Lake
The hot bite on Upper Red Lake right now, Hawthorne says, is fishing down-sized Tumbler Spoons dressed with small minnow heads in 9 to 11 feet, over rocks, close to shore — many of the same spots that were productive early in the season.

“But instead of hitting those same areas with Rippin’ Raps and larger Tumbler Spoons, instead we’re using 1/12th oz. Tumbler Spoons,” he explains. And instead of fishing from dawn to dusk, he’s having his best success between 2 and 8 p.m.

“On Red Lake, it’s like a light switch gets flipped in January, and the fish go about 80 percent nocturnal,” Hawthorne explains. “You’ll still scratch out a few here and there during the day, but in the evening hours, the bottom just starts to crawl.”

Hawthorne matches the hatch with a Tumbler Spoon in the Yellow Perch color pattern, which features green and orange accents, silver holographic glitter, and silver-colored back. “It looks like an emerald shiner,” he says.

Don’t pinch off your minnow heads too large, Hawthorne cautions. “I’m pinching my minnows right behind the gills, making for a really small, light profile — just about a quarter-inch long. You just want to give it a little scent. You don’t want to bulk up the bait too much.”

Hawthorne’s hot shallow Tumbler Spoon bite works best when traveling light, fishing out of portable shelters. “If you’re in a hard house, you’re going to do better out deep, because of the noise you’re going to generate,” he explains. “On Red Lake, noise is really key to a lot of the fishing. Because you will spook fish.”

Grand Rapids area
Neustrom’s been chasing crappies this winter in and around his home base in Grand Rapids. Among his top offerings this month has been a VMC Tungsten Tubby Jig dressed with wax worms or small Trigger X plastics.

“When contacting fish, I can drop my bait to them quickly and so many times they will rise up to meet the bait as it falls,” he says. “It’s a great bait also when the fish are a little neutral.”

When a crappie school gets active, however, a No. 3 Jigging Rap “is hard to beat,” Neustrom says. And although “it works great all by itself,” he says, he’ll sometimes dress it with a euro larvae or wax worm. “I usually work it slightly slower than I do for other species, but still rely on its swimming motion to trigger strikes.”

For all three presentations — which “work pretty much all through the season and will work for you,” Neustrom says — spool your crappie rod with 3-pound Sufix Invisiline ICE Fluorocarbon.

Lake Of The Woods
Having guided on Lake of the Woods a lot in the last few weeks, Beef says if you’re headed up that way, be sure to pack VMC Rattle Spoons in the Glow Gold Fish or Perch patterns. The key to both is the gold-colored back and the unique rattling sound.

“Most people up there just use old-fashioned jigheads,” Beef says. “I let them start using those Rattle Spoons and they helped a lot.” In addition to the gold-backed color patterns, Gold Pink Fire UV is working well.

Lake of the Woods walleyes and saugers are biting all day long in clearer water located about 15 to 20 miles from the south-shore resorts, Beef reports. “The fishing’s just a lot better out there than it is up on the south shore right now,” he says. “It’s a good morning and afternoon bite, but in low light is when the bigger fish seem to get more active.”

Bemidji, Leech And Cass lakes
Closer to home, Beef has “gotten into some pretty good perch and walleyes” on Bemidji, Leech and Cass lakes with Rattle Spoons. “It’s just been crazy how good the fishing has been,” he says. “Usually, this is our ‘Dog Days of the Winter.’”

Beef targets perch with a 1/16th oz. Rattle Spoon in the Gold Pink Fire UV color pattern.  He’s been focusing on shoreline breaks in 13 to 15 feet of water near green vegetation or a hard-to-soft bottom transition.

“Find the first break with mud on it, and you are definitely on some fish right now on Bemidji, Leech and Cass,” Beef says. “I’m fishing in the muck right now, because we’re starting to see some [bug] hatches going.” Green vegetation is still producing enough oxygen to sustain young minnows and young perch, which “brings in the predators,” Beef explains.

Beef attracts perch by slowly bouncing a Rattle Spoon on a mud bottom then holding it still 20 to 30 seconds before jiggling it. If one spot does not produce quickly, he moves to another. Sitting still has not been an option lately.

“Most of these fish are moving, they’re not staying in one area,” Beef says. “So I am drilling a lot of holes. I’m not just staying at the same two, three, four holes for the whole day. We are working up and down the breaks and up and down the different depths.”

Modified Trigger X Mustache Worms have been tempting big perch for Beef as well. “I’ve been taking off the side pieces and just using the center ball,” he explains. “When you rip off the arms, it almost looks like a salmon egg. The perch are loving it.”

Beyond the perch bite, Beef reports that a 1/8th oz. Gold Pink Fire UV Rattle Spoon dressed with a minnow head has been “pretty dang hot” for walleyes, and that Glow Green Fire UV Tingler Spoons dressed with one or two minnow heads “have just been on fire” for pike. “They just come cruising in and just annihilate it,” he says.

Walleye have been biting best at dawn and dusk, while the perch action remains hot all day. “The walleye bite at sunrise up until about an hour after, and then the perch just come flying in,” Beef says. “And then it’s perch all day until about 4 o’clock in the afternoon. Once the low light begins, those walleyes start again.”